Posted on January 9, 2011 by jaysanderscpa

In Curve Components Part 1 and Part 2 I addressed the elements that make up one’s personal curve.  In the following I’ll bring in other factors, factors beyond our control which can do real damage to the shape of our plan curves.  In the image above you’ll see four curves.  The curve in the bottom left corner is our base plan curve.  The other curves represent the base curve plus the individual macro force; base plus tax, inflation or social security.  You’ll note that in each instance the base plus curves are larger and more pronounced than the base curve.  That’s not good because when our curves grow in height it means we’ll need more money to retire.  The negative numbers indicate that the curve plus macro force is worse, for example, the inflation curve its 58% worse than the base curve.

We created this image to dramatize the impact of the macro forces but the assumptions used are not unreasonable.  For example, the inflation curve assumes a 4% rather than 3% rate of inflation which we used in the Bob and Nancy example.  For social security we used a benefit of 50% of today’s projected benefit.  I don’t think that’s an outrageous assumption either.  If you’ve checked out the 1st page of your last annual Social Security Statement and I quote “In 2016 we will begin paying more in benefits than we collect in taxes. Without changes, by 2037 the Social Security Trust Fund will be exhausted and there will only be enough money to pay only about 76 cents for each dollar of scheduled benefits.   We need to resolve these issues soon to make sure Social Security continues to provide a foundation of protection for future generations.”

When you put all the macro forces together at once it could look like this. 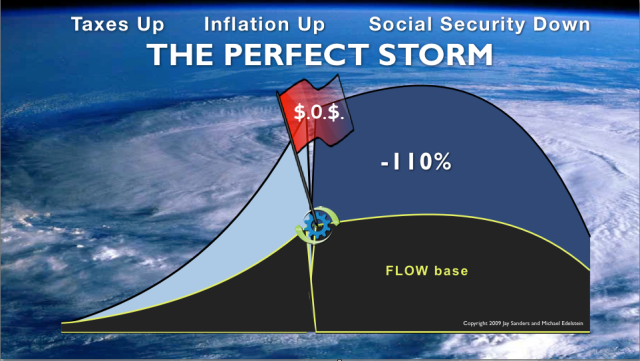 Jay Sanders, CPA/PFS, CFP® "There's lots and lots of Numbers in business and your personal life but only some are relevant. The key is to know which one's matter, worry about them and forget the rest."
View all posts by jaysanderscpa →
This entry was posted in ABCs of The Curve, Financial Literacy Basics, Personal #s and tagged Financial Literacy, Financial Planning, Money Management, Personal Finance, Retirement Planning. Bookmark the permalink.