Posted on February 17, 2011 by jaysanderscpa 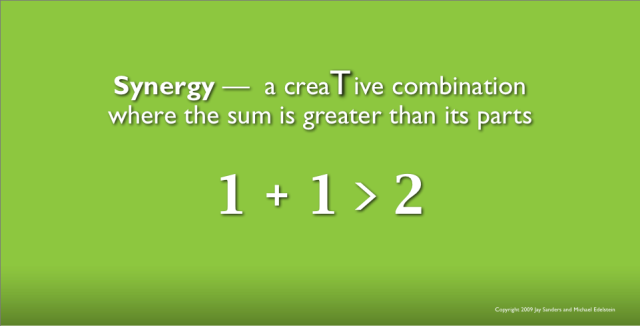 Google’s a great example of creativity on steroids. Brin and Page grad students at Stanford had a better idea for a search engine. The Stanford users seemed to love it and the buzz was awesome. In any case they approached or were approached by venture capitalists, not important which came first, with an idea on how to marry the search engine with advertising. I think through the first several rounds the VCs put up about $25 million. The rest is history.

Let’s look at Google as pure creative synergy. For our purposes a simple definition of synergy is 1 +1 > 2, or the value of the parts in combination are greater than the parts themselves. So let’s do the math for Google. For magnitude you’ll need to know that at
a billion is a 1,000 million.

So here we go:
Inputs:
$25 Million in cash and $25 Million in intellectual capital (Brin and Page idea for the search engine, my eval) for a total of $50 million.

Outputs as measured by market value:
Google’s market value in February 2011 is approximately $200 billion or 200,000 million. As an aside about 20,000 people now work for Google worldwide.

Google’s a dramatic example but I’m sure you get the point, creativity is a game changer. It’s what Malthus couldn’t fathom.

Jay Sanders, CPA/PFS, CFP® "There's lots and lots of Numbers in business and your personal life but only some are relevant. The key is to know which one's matter, worry about them and forget the rest."
View all posts by jaysanderscpa →
This entry was posted in More about Creativity and tagged Creativity, Financial Literacy, Financial Planning, Google, Money, Money Management, Personal Finance, Personal Financial Planning, Small Business. Bookmark the permalink.